When first introduced to the problem of diamond dependency conflicts, many people ask: “Why doesn’t the compiler catch it?” To explain why, we need to dive into how the Java build process works.

When javac compiles a program, it verifies that every class, variable, or other type of symbol referenced by the code can be found somewhere. Let’s look at an example. We start with the most basic case, a library with no dependencies. In this case, all symbolic references must exist within the library itself (or in the Java runtime, but let’s ignore that for our purposes).

Consider a library D that contains classes S and T. Class S uses class T (so we can say that class S “references” class T). We are also going to track the version of library D (here, version 1), because this will be important later.

If T is missing, the compiler refuses to compile library D, and it is impossible to execute the code. If everything is in order, the compiler builds a JAR file. This JAR file can now be used by other libraries.

Now let’s add another library B, which depends on library D. It contains class U and class V. Class U refers to class V in its own library (library B) and also to class S in library D.

If we tried to switch library B’s dependency on D:1 to D:2 which has class S2 instead of S, then library B would not compile:

Thus, in this scenario where we only have direct dependencies, the compiler will catch all missing references.

Now let’s add another layer called library A. It contains class W and class X. Class W refers to class X in its own library (library A) and also to class U in library B. 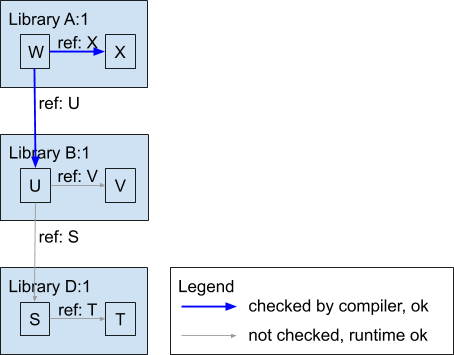 If we use D:2 instead of D:1, library A still compiles since the references made by library B are not checked. The problem shows up later when class W is invoked at runtime: class W calls a method in class U which in turn tries to call a method in class S, but class S is missing, so the runtime throws a NoClassDefFoundError. 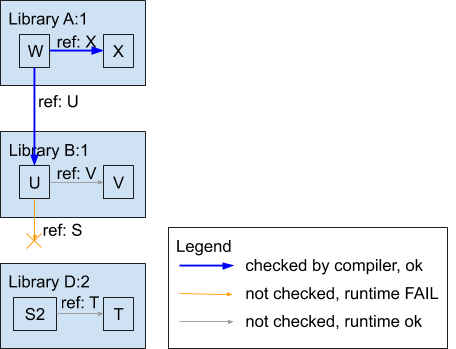 So far we have only considered a linear dependency chain, and the scenario described above might seem unlikely because there is no reason for the wrong version of D to be chosen. However, as soon as we add a diamond dependency conflict, we see the relevance. All versions of D have a problem, but the compiler doesn’t tell us about it - instead, we only find out at runtime. If D:1 is used, then the reference from class Y to class S2 fails at runtime. 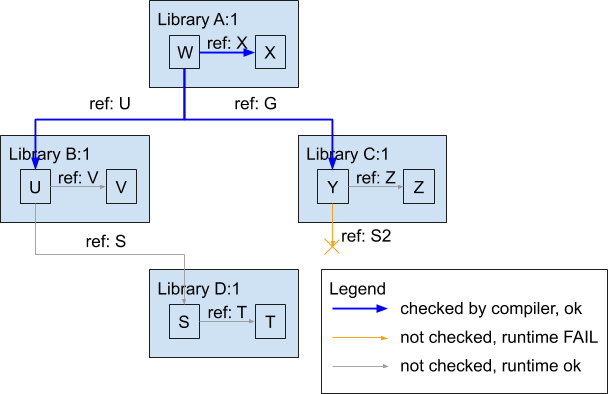 Conversely, if D:2 is used, then the reference from class U to class S fails at runtime. 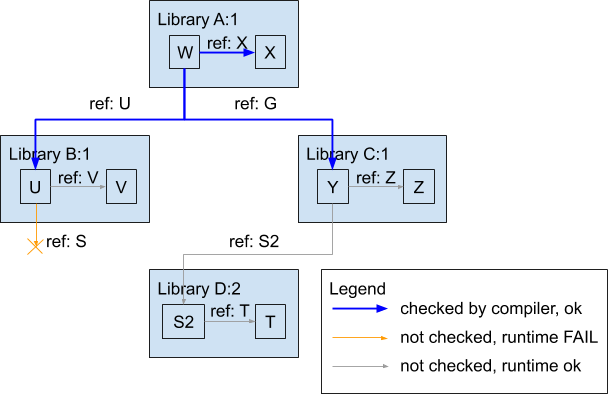 This behavior of Java makes diamond dependency conflicts particularly pernicious. Theoretically, we should be able to tell that our program will fail before we even run it, but Java does not tell us.