How does version resolution work in Maven and Gradle?

The build system that you choose for building your Java code determines which version resolution algorithm is used to choose the versions of your dependencies. Unfortunately, the two most popular build systems (Maven and Gradle) use different version resolution algorithms. This article explains how the algorithms of these two build systems work and how they interact with each other. No matter which build system you choose, you are likely to have direct or indirect dependencies that use the other one, so you need to understand how both work. To limit the scope, we ignore other build environments like Eclipse and Ant that are not based on the Maven repository system.

For example, we could have an unresolved graph that looks like this:

In this graph, there are two versions of A (10.0 and 10.1). The version resolution process picks a single version for A, which could be either version depending on the algorithm. If A:10.0 is picked, the resolved dependency graph looks like the following. In this graph, C’s dependency on A:10.1 is overridden.

If A:10.1 is picked, the resolved dependency graph looks like the following. In this graph, B’s dependency on A:10.0 is overridden.

Now let’s look at the version resolution algorithms used by Gradle and Maven. Let’s consider Gradle first because it is the simpler one to describe. Simply put, Gradle chooses the highest version encountered in your dependency graph. For the example above, Gradle picks A:10.1. 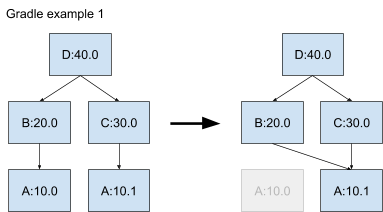 Gradle applies the higher-version rule even if it overrides one of your own direct dependency declarations: 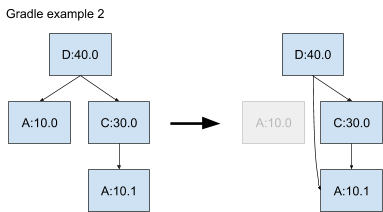 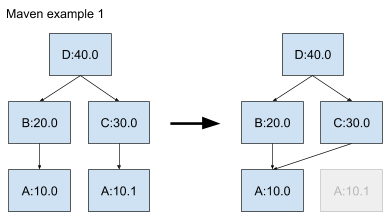 As you can see by comparing the resolved graphs, Maven makes the opposite choice. Now consider the second example, where the root has both a direct and indirect dependency on the same library: 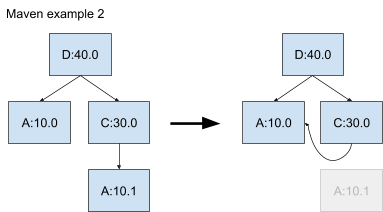 It should be noted that Maven and Gradle don’t always make the opposite choice. In the following example, the highest version is also the closest to the root, so Maven and Gradle both choose A:10.1. 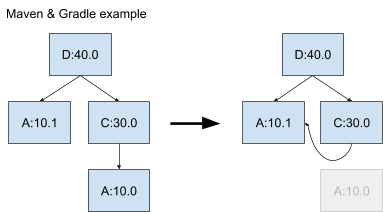 Interaction between Maven and Gradle

Consider an example using Gradle example 2 as its basis, where library D depends on A:10.0 and C:30.0 (and thus indirectly A:10.1). Assume C depends on a feature added into 10.1. This means that if 10.0 is selected, C fails at runtime. From library D’s perspective, this is fine, since Gradle chooses version 10.1.

Suppose a new library E uses Maven as its build system and has a dependency on D. When E is built, Maven resolves the whole dependency graph, including D’s subgraph, even though Gradle resolved the subgraph of D for when D was originally built. When Maven performs its version resolution, it chooses a different version of A (10.0) than Gradle did (10.1), which breaks C. This happens even though D works perfectly fine internally. 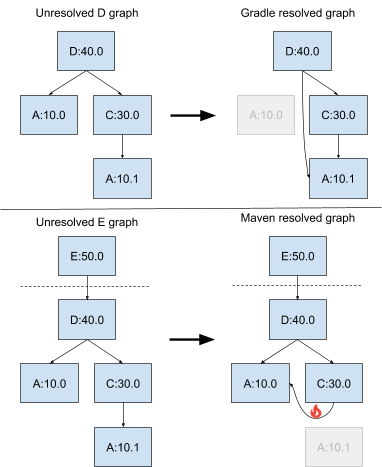 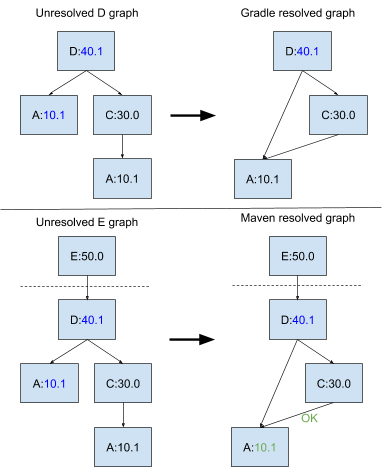 There are many more possible scenarios which require more complicated fixes. Solving those problems will be the topic of another article.

For more details on each build system, see their respective documentation: